It’s that time of year and MusiCamp is sorting out the summer schedule. We’re planning to keep our three themes from last year –

But we’re juggling some other possible weekly themes, like:

Let us know what you think or if you got any other ideas. Anything is still possible!

For reference, below are the descriptions from last years themes…

Besides the musical games listed on the “about page”, the week will also include exploring the roots of the blues through the pentatonic scale, African American shouts from which the blues came, and a host musical stories. Campers will also:

Below are some pictures from Diddley Bo making during the Blues Week 2013.

…. Special guest artist for the week includes AnnA Melnikoff and her orchestra of drums!

NO DRUM NEEDED! Special guest artist AnnA Melnikoff (along with her orchestra of drums!) will be co-hosting this week. Campers will have a chance to play the polyrhythmic accompaniment on 3 bass drums (known as dunun) and develop riffs and patterns on djembes. Focusing on rhythms that accompany rights of passage, participants will build masks and also explore the meaning of the drums and the rhythms from the very ancient Mande tradition. A drum will be made available to every camper.

Click on the gallery below to view more pictures and some video of West African Drumming camp 2013. 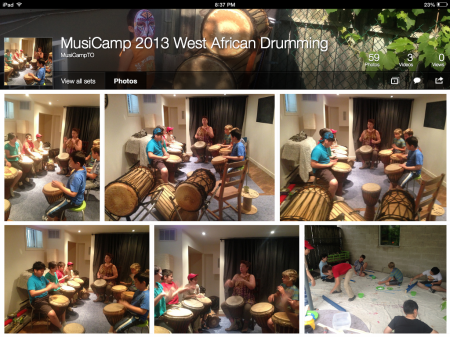 Have a song you want to sing? A story you want to tell? This week will help aspiring songwriters put their ideas to music. The week’s musical activities introduce campers to aspects of songwriting – like hooks, riffs, harmony, and rhythmic accompaniment. Other aspects – like chorus-verse format, basic chord progressions,  intros and outros, rhyming and storytelling – will also be explored. By the end of the week campers will have written and/or collaborated on the creation of an original song. Kids who already have basic guitar chording are encouraged to bring their guitars. The week ends with world premiere performances of our songwriter’s compositions!

Click on the gallery below to view more pictures and some video of Composition and Song camp 2013. 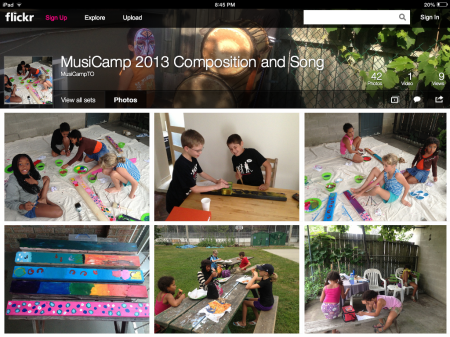