In 2014 SavvyMom.ca listed MusiCamp as one of Toronto’s best Summer Day Camp! Click the image to visit their page.

Why weren’t there camps like this when we were kids? Located in a home studio close to Dufferin Grove Park, class sizes are small and no prior musical experience or skill is required. MusiCamp summer sessions include: The Blues, Singer-Songwriter, West African Drumming. Best For: Kids 8-14 who march to their own beat. 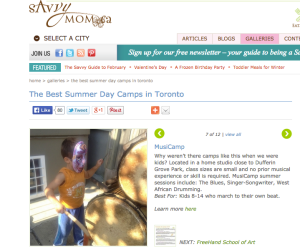 My 9 year old tried banjo for the first time at MusiCamp. Almost a year later, he’s still playing! A small, friendly space where kids’ enthusiasm for music is nurtured.

Our daughter attended a drumming week two summers ago that she still talks about.  The experience gave her confidence, and exposure to music and stories she had never had before.  We were really impressed by the camp and the performance at the end of the week. Highly recommend.

MusiCamp was an amazing experience for my son Cyrus. Not only did he learn from the fabulous instructors in the West African Drumming week, but the experience gave him the confidence to perform a drumming/vocal solo in front of his entire school. He loved all the activities especially the instrument making and the musical walks to Dufferin Grove Park. The week culminated in a glorious recital under the grapevines. I was immensely proud of what these young musicians had accomplished in only one week! Bravo MusiCamp!

Lily and Oliver just finished a week of Music Camp. They loved the experience and they actually learned so much in such a short time!

My two boys attended the Blues week last year and the year before and it was amazing experience for them.
I am very glad that I will have the opportunity to bring my children again and they are very happy to go! Andrea is a very professional singer and a dedicated teacher! We were very surprised that in such a short time the kids have learned so many songs. In the end of week they performed together (in multi-part harmonies!) and they sounded beautiful.
I am highly recommending this camp!

Front Page Headline: WE GOT THE BEAT, 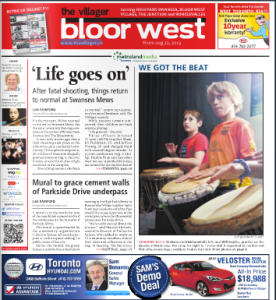 2023 VOCAL WORKSHOPS AT THE TRANZAC